Dark Side of Turkish Basketball 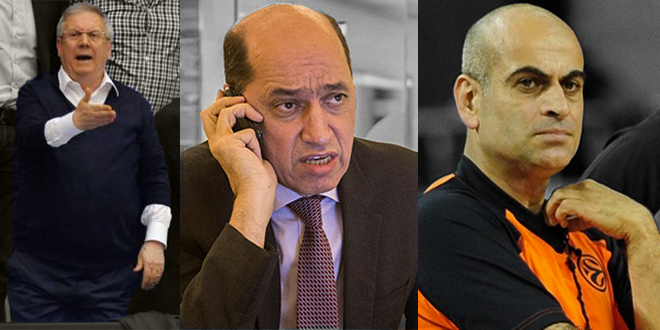 Referees who were assigned to critical games, penalties that were given and/or ignored are just a few examples to give about the play that was staged on courts, alongside of the matches themselves.

Now, it’s time to bring what has been really happening to light in cronological order.

Fenerbahçe was holding the advantage of being the home team of the TBL final series of 4 games. Hence, the first two games of the series started in Ülker Sports Arena.

Turkish Basketball Federation assigned Recep Ankaralı as the head referee to the second came of the TBL finals.

Let’s get to know Recep Ankaralı a bit.

Recep Ankaralı’s name is repeatedly mentioned in the documents of the most scandalous game fixing operation in history of Turkey.

In those documents, which were leaked to Internet, there is an attention-grabbing phone call transcription between Recep Ankaralı and Fenerbahçe Ülker Basketball Branch Manager Semih Özsoy. The conversation was had only a day before a crucial game against Galatasaray which resulted in Galatasaray losing and Fenerbahçe becoming the league champion.

During this very telephone call, Ankaralı assures Semih Özsoy with these exact words: Don’t you worry, everything is under control.

The day after Recep Ankaralı assures Fenerbahçe’s manager, he was assigned as the head referee of the game which Fenerbahçe won by 91-88.

Needless to state, Recep Ankaralı made many decisions during that game which are open to discussion.

Despite the documents which were leaked, Turkish Basketball Federation opened no investigations.

Second Game of the Series(1-0)

Recep Ankaralı who has these stains in his past, had been assigned to the second game of the finals of season 2013-2014 and made critical mistakes which inevitably determined the champion of the season.

23 seconds to the final whistle, Galatasaray was leading by 1 point and brought the ball into the play. In this position, Bo McCalebb fouled Manuchar Markoishvili to steal the ball so very clearly but the foul was never whistled. Fenerbahçe scored and won the match.

Frankly, the whole destiny of the series was shaped in that match by Recep Ankaralı and the assistant referees. Had Galatasaray won that game, they would have had the home advantage.

In the fourth game of the series, head coach of Fenerbahce, Obradovic, provoked the fans and referees headed to the locker room after the scene the fans caused.

Turkish Basketball Federation’s Disciplinary Board penalized Galatasaray with 2 games with no spectators.

According to the disciplinary regulations, the next game was supposed to be open to only women who would bring a kid under the age of 14 with them.

Unfortunate for the Turkish basketball history, the TBF slightly changed these regulations to their favor and called for rules unheard of before.

Abdi İpekçi Arena is of capacity of hosting 12,000 people. TBF announced that only 5,000 spectators are allowed to come and the parking lot shall be open to no one.

These calls had never been applied to any club before and are clearly against the Disciplinary Regulations.

The game took place in Ülker Sports Arena where some fans were seated against the regulations to specific areas on purpose to verbally abuse and throw things to Galatasaray’s Head Coach, staff and the players through out the game. (Footage from fifth game: Beko Basketbol Ligi Final Serisi 5. Maç Sonrası Yaşananlar)

A noise bomb blasted right behind the Galatasaray bench.

Head referee Engin Kenerman’s interaction with some of the spectators there, in that game, was an absolute scandal too.

Inspite of the unjustly calls of the TBF against Galatasaray, the team won the 6th game and evened out the series to 3-3.

Seventh Game of the Series

After all that happened in the fifth game of the series, TBF found it adequate to only fine Fenerbahçe with 25,000 TL. The announcement was made on 17th of June; 4 days after the fifth, one day after the sixth match.

Kaan Kural (journalist/commentator) who stated that Fenerbahçe should have been penalized with no spectators, was threatened by Fenerbahçe’s ex vice president.

Ankaralı was supposed to be in another city (Nevşehir) to attend a conference on game day, but he was called to cancel and got assigned to the seventh game by no one but Turgay Demirel himself.

On a side note, Maurizio Gherardini, who helped Turgay Demirel with the lobbying so Demirel can be selected as the President of FIBA Europe, became the General Manager of Fenerbahçe Basketball.

Maurizio Gherardini was hosted several times through out the season by Turgay Demirel, in Turkey.

All these made Turkish Basketball Federation’s calls even more disputable.

Sadly, this season is not where the story of corruption began.

In the fourth game of the finals of TKBL, Fenerbahçe player Horakova made a travelling violation whilst going for a layout and evened out the score. Fenerbahçe won the game in overtime and became the champion. The referee was Murat Biricik.

Recep Ankaralı’s phone transcriptions leaked along with other documents of evidence of, by far, the biggest match fixing operation in history of Turkish sports.

The phone call made, only a day before the game Fenerbahçe won the title by defeating Galatasaray. It was between Recep Ankaralı and Fenerbahçe Ülker Basketball Manager Semih Özsoy.

Recep Ankaralı, tells Semih Özsoy “don’t worry, everything is under control” during the call.

Ankaralı was assigned as the head referee. Fenerbahçe won by 88-91.

TKBL finals, two minutes to the end of the game, Galatasaray was leading by an 8 point margin. Referees Emin Moğulkoç and Özlem Yalman stepped in and Fenerbahçe won the game.

The season 2013-2014 is only the final straw. Galatasaray Sports Club objected to be a part of this corrupted system.

The president of Galatasaray Sports Club, Ünal Aysal, announced on Galatasaray TV that Galatasaray men’s basketball team, was NOT going to play in the seventh game of final series of the league on June 19th, 2014.

After Aysal’s announcement, the President of TBF, Turgay Demirel, talked about the situation as an on-air guest of a national TV channel with his voice shaking. He apologized for his shaky voice.

After Turgay Demirel’s talk, Galatasaray Sports Club put an official declaration to the club’s official website and made it clear that their last call of not appearing in the seventh game of the TBL finals was still valid.

Turgay Demirel, the President of TBF, openly threatened Galatasaray by giving no pass to the club to play in European Cups if they don’t play in the last game of the finals.

Galatasaray men’s basketball team did not appear in the last game of the TBL final series of season 2013-2014. It was a reaction against TBF’s calls which were nowhere close to being just or lawful.

The championship title of Turkish Basketball League of season 2013-2014 was not earned. It was given away!

No Result
View All Result